Be Back Next Year

Posting to the blog will stop for Christmas break. I will resume posting on or around January 5th.
Posted by Matt at 11:36

The American constitution has been changed (amended) only 17 times in the last 221 years. Students in my Introduction to American Law class were told how difficult it is to amend the constitution, but some legal scholars beg to differ. According to a piece in the Wall Street Journal, some scholars think that the founding fathers wanted a constitution that could be amended with relative ease. The article is worth the read if you are at all interested in how the American constitution can be changed.
Posted by Matt at 10:56

I just wanted to follow up on the very informative presentation that was given in our Debating Controversial Court Cases class last week concerning gun control. As our presenters noted, Washington D.C., the city whose law was struck down by the Supreme Court as violating the 2nd Amendment, is busy trying to pass new gun ownership restrictions. The Associated Press had a piece on the subject yesterday. It's worth a look if you are interested in the topic.
Posted by Matt at 09:02

Presidential Power and the War on Terrorism

What are the limits of Presidential power? The Bush Administration's "war on terrorism" has sought to push the limits of presidential power, and was doing so rather successfully until the Supreme Court started reviewing the question a few years ago. The Administration has now lost three of four cases before the Court concerning their anti-terrorism policies, all of which they say stem from the power of the President. Might the Administration be heading for it's fourth defeat? The Court has decided to grant review in a case dealing with a terrorist suspect who was seized in the United States and has been held in custody for six years without any hint of criminal charges being filed. In short, the question is whether the President can designate someone not picked up on the battlefield as an enemy combatant and detain that person indefinitely. McClathy news service has more on the case.
Posted by Matt at 11:05

A few weeks ago in my Debating Controversial Court Cases class, we had a lively discussion about the Tinker v. Des Moines case and whether students should have free speech rights in schools. As I mentioned in class, it seems like the Courts deal with this issue often as they struggle to balance the free speech rights of students with the interest of schools to keep order and educate students. A very interesting case was recently argued before the Third Circuit Court of Appeals. The Pittsburgh Post-Gazette reports:

What began as a lowbrow parody of a high school principal goes before a federal appeals court this week.

The case of Justin Layshock, who lanced his principal with an unflattering Internet "profile" created on a home computer, has become a battleground pitting Pennsylvania school administrators against groups that defend free-speech rights.

The 3rd U.S. Circuit Court of Appeals in Philadelphia will hear arguments from each side Wednesday.

Mr. Layshock used his grandmother's computer in December 2005 to create a fictitious profile of Hickory High School Principal Eric Trosch. Mr. Layshock, then a high school senior, made fun of the principal's bulk and implied that he smoked marijuana. Mr. Layshock posted the profile on the Internet social site Myspace.com.

Angered, Mr. Trosch and administrators of the Hermitage School District in Mercer County suspended Mr. Layshock from school for 10 days. After that, they placed him in an "alternative" education program that Mr. Layshock considered inferior.

Seems hard to believe that schools could possibly punish students for speech they engage in outside of school, but the Internet has truly changed the nature of speech. The Philadelphia Enquirer has more.
Posted by Matt at 11:17

At some point or another the topic of the death penalty has been mentioned in each of my classes this semester. Recently, I was asked about how many executions are carried out each year in the United States. I had to admit my ignorance, and state simply that I knew the number was lower than usual because of a recent Supreme Court case. Thanks to the fine folks at Reuters, who ran a story yesterday about how executions have reached a 14-year low, we now have some answers. Last there were 37 executions, and this new low was indeed partly caused by a moratorium on executions while the Supreme Court decided whether death by lethal injection violated the Constitution (they ultimately decided it does not). But another reason is the continuing decrease in the number of death sentences that are handed out. Some statistics on the death penalty, which states have it, how many executions per states, etc., can be found here.
Posted by Matt at 08:03

A small-town Massachusetts police chief who authorities say promoted, organized and profited from a firearms exposition where children were encouraged to shoot machine guns and where an 8-year-old killed himself with a Micro Uzi was charged Thursday with involuntary manslaughter.

Although the event was promoted as an opportunity for children to fire machine guns under the supervision of certified instructors, 8-year-old Christopher Bizilj had been supervised by a 15-year-old boy who was "knowledgeable about guns" but not certified as a firearms instructor, Hampden County District Attorney William M. Bennett said in outlining charges against Pelham Police Chief Edward B. Fleury and two others.

The elements of involuntary manslaughter under Massachusetts law are:

Labels: Introduction to US law, Law and Social Change 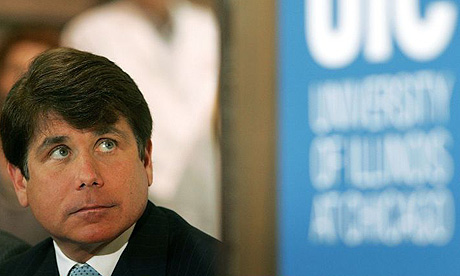 Students in my Introduction to American Law class know that the President of the United States may be removed from office if he is impeached by the House of Representatives and convicted by the Senate. In the House, impeachment requires a majority vote. In the Senate, conviction and removal must pass with 2/3 of the vote. Ever wonder how the chief executive officer of a state (a Governor) can be removed from office? Well, we may just be getting a lesson on this soon. Yesterday morning the Governor of Illinois (pictured) was arrested by the FBI on corruption charges; the main charge being that he was trying to fill President-elect Obama's Senate seat by choosing the person who gave him the most money. As an aside, the Illinois Constitution gives the Governor the power to fill a vacant U.S. Senate seat. In short, he was trying to sell the position formerly held by Obama. The Governor has not resigned, and from what I know of him, he probably will fight these charges to the bitter end. But the Illinois legislature does not have to wait to the end. They can remove him. According to the Illinois Constitution, the Governor can be removed via a process that is identical to the process used to remove the President. Just in case you were wondering.
Posted by Matt at 18:36

The Right to a Speedy Trial

Students in my Introduction to American Law class heard me say last week that the right to a speedy trial found in the U.S. Constitution is almost meaningless. I stand corrected, at least for the time being. Apparently, the Vermont Supreme Court recently ruled that a conviction had to be overturned and the defendant let free because he was not given a speedy trial. The case is currently pending before the U.S. Supreme Court, so my hunch is the right to a speedy trial will return to being meaningless once the Justices get through with this case.
Posted by Matt at 08:18

Labels: Introduction to US law

Hate Crimes Against Arabs Down

Students in my "Law and Social Change" class were treated this past Monday to a presentation on the war on terrorism in America. Part of the presentation addressed how Arabs and Muslims were impacted in the United States after September 11. According to the Arab-American Anti-Discrimination Committee, hate crimes incidents against Arabs and Muslims have been steadily decreasing since 2003. This should not be totally unexpected. As with all things related to September 11, the farther away we get from the attacks, the more reasonable the government and people seem to be in their responses to it.
Posted by Matt at 08:12

In God We Trust

or maybe I should say to God we give credit. At least that is what legislators in the State of Kentucky say must be part of the Kentucky Department of Office Security's annual report. According to the Associated Press:

The law that organized the Homeland Security office first lists Homeland Security's duty to recognize that government itself can't secure the state without God, even before mentioning other duties, which include distributing millions of dollars in federal grants and analyzing possible threats.

This seems to raise the same question that I ask myself every time I see an athlete praise God after a sporting event. If both teams ask for God's help with winning, do members of the losing team blame God for the loss? In the instance above, if God gets credit for securing the State of Kentucky, might he be blamed should something terrible happen there? Probably not. Instead the blame will be placed at the feet of "abortionists" gays and the ACLU. (follow the link and see quote number one if you are unsure what this means).
Posted by Matt at 19:37