The UK's longest serving Court of Appeal judge is causing a bit of stir in English legal circles. As part of a series of lectures, Sir John Laws (high courts judges automatically obtain a title upon appointment to the court) said, "I have, in common with others, come to think that this approach [treating Strasbourg decisions as authoritative] represents an important wrong turning in our law." Coverage by the Guardian also notes:


Laws, the longest-serving lord justice of appeal, questioned an important principle laid down nearly 10 years ago by Lord Bingham, who was then senior law lord.

In a case called Ullah, Bingham had said that the correct interpretation of the convention could be authoritatively expounded only by the human rights court in Strasbourg. "The meaning of the convention should be uniform throughout the states [that are] party to it," Bingham added.

But Laws disagreed. "There may perfectly properly be different answers to some human rights issues in different states on different facts. I think the Strasbourg court should recognise this."

The remainder of the article is worth the read.
Posted by MBL at 07:52

Salon.com has an incredible take down of the American legal education system:


Since at least 1985, the American Bar Association’s Section on Legal Education has published annual statistics about the rates of enrollment at American law schools, the costs of attendance, and the eventual employment of law graduates. Looking at how these numbers have changed since the financial crisis of 2008, one thing is clear: Law schools are doing quite well for themselves. Tuition at private law schools has steadily increased, climbing from a mean of $34,298 in 2008 to a mean of $40,634 today – an increase that, by my calculations, outpaces inflation by about $3,000.

The remainder of the articles goes on to describe American law schools as being " toxic and hyper-capitalist," and in the long run a bad investment. It is a long read, but perhaps the contrast between the author's view of U.S. law schools and your own experience here in Germany might be of interest to you.
Posted by MBL at 14:36

When You Don't Want the Supreme Court Take Your Case

We sometimes forget that one of the two parties whose case is being petitioned to the U.S. Supreme Court actually would rather the Court not take their case. Of course this is because one of the parties won in the Court of Appeals. The Washington Post has some recent examples of this desire to have your case rejected.
Posted by MBL at 16:49

Taking A Case to the U.S. Supreme Court It isn't easy. At least that is what these young Iowa attorneys say in this very well done short article about their journey to the U.S. Supreme Court.
Posted by MBL at 16:47

A recent press release from the Home School Legal Defense Association (HSLDA) gives us the details of this unique case that might be headed to the United States Supreme Court:


In April 2013, a three-judge panel of the Sixth Circuit Court of Appeals sustained the Obama administration’s revocation of asylum granted to the family in 2010.

The original immigration judge, Lawrence O. Burman, granted the Romeike family asylum on January 26, 2010, under the Federal Immigration and Naturalization Act (INA) because Germany’s national policy of suppressing homeschooling violated their religious faith and because German authorities were improperly motivated to suppress homeschoolers as a social group.

In its ruling against the Romeikes, the Sixth Circuit rejected the judge’s findings, stating that Germany’s harsh treatment of homeschoolers did not amount to persecution, and that the German authorities were not motivated by an improper purpose.

After losing the Court of Appeals, the normal route is to request a hearing before the U.S. Supreme Court. As students will recall, a hearing before the highest court is not a matter of right. Instead, the Court grants permission to only those cases it wishes to hear. It takes four of the nine Justices to agree to hear the case in order for it to reach the Court, and of the thousands of requests that the Court receives each year, usually only around 75 are heard. 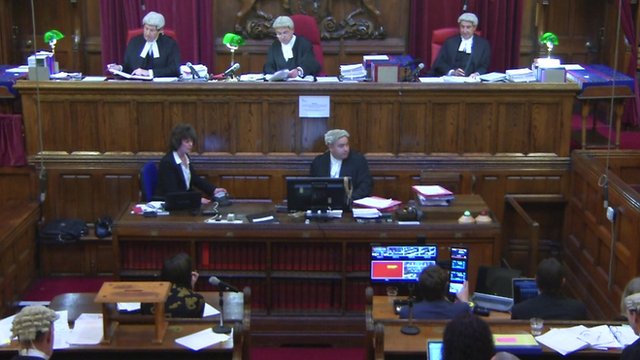 I have written on a few occasions about the debate over whether court hearings should be televised (see here and here). While the debate rages on, more and more courts are opting to open up their courtrooms to television: the latest high profile court being the UK Court of Appeal! The BBC has more with a video!
Posted by MBL at 21:31

The Origin of Judical Lifetime Appointments in the United States

A quick reading of the U.S. Constitution might leave one puzzled as to how long federal court judges are allowed to serve. No where in the document does it specifically say that federal judges are lifetime appointments. Instead, the Constitution mysteriously says that judges shall serve "during good behavior." Lyle Denniston, veteran Supreme Court watcher, explains how this phrase came to mean lifetime appointment.
Posted by MBL at 15:38

Judges in the federal courts system of the United States must abide by a judicial code of conduct, and when they deviate from that code, they can be removed from a case, as one U.S. District Court Judge recently found out.
Posted by MBL at 21:24

It is now a time honored tradition for American academics to every now and then call for a new constitution in the United States. The 224 year-old document that has changed little since its ratification has served the country relatively well, many argue, but in light of today's extreme political partisanship, it's time for a change. A recent piece in The Atlantic makes this argument, and also suggests that perhaps there is a model for what works in a modern democracy. The model? Germany's Basic Law!
Posted by MBL at 21:20