Borat Tricked Me. Can I Sue?

There is a great piece on the Slate Magazine website about whether the people who were tricked into appearing in the new Borat movie, Borat: Cultural Learnings of America for Make Benefit Glorious Nation of Kazakhstan, can sue under a variety of legal claims. As the article notes, these people all had to sign the "standard release form" used by the entertainment industry. This agreement is basically a contract that prohibits people from suing the producer of the movie because they didn't like what movie did with their image. The article does a nice job explaining some of the potential legal claims that are barred by these release forms. The article ends with this question:

The release form seems to cover all the bases, but it's not clear if it precludes all legal action. A participant might claim that he was tricked into signing the contract under false pretenses.

An interesting question in light of the emphasis placed upon volition in determining whether a valid contract exists.
Posted by Matt at 08:49 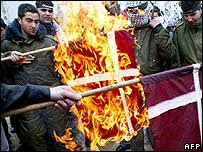 In our U.S. Constitutional Law class, the idea of flag burning has a special place in our discussion of freedom of speech. It's special because: 1) Congress tried twice to outlaw burning the American flag and failed both times because the Supreme Court said such a ban violates constitutional rights ; and 2) this example illustrates just how far reaching the right to free speech is in the United States. I've never really given much thought as to what other countries do with this issue. Can one burn the German flag in Germany? I don't know. How about in the U.K.? Up until today I didn't know the answer to this question either. But it appears the answer is YES, one can burn the Union Jack and not be prosecuted. But that may change. According to the BBC, Scotland Yard is floating the idea of a flag burning ban under the guise of curbing violent protests. Does the simple act of burning a flag amount to violence? Should this be protected as speech under all circumstances? We will discuss this further in U.S. Constitutional law next semester, but in the meantime, it's food for thought. And anyone who had British Constitutional Law last semester, feel free to explain (using the comments feature on this blog) whether such a law would be upheld by the British courts. I simply don't the answer, but I'm curious.
Posted by Matt at 14:09

The New York Times ran a story a few days ago on the case I talked briefly about in Common Law of Contract class concerning comma use in a contract. I was a bit off on how much money was at stake (my terrible memory had me thinking 100s of millions when in fact the comma placement is worth $1 million), yet the point remains the same. Drafting a contract very carefully, even down to comma use can save one a lot of trouble. As the NYT reports:

If there is a moral to the story about a contract dispute between Canadian companies, this is it: Pay attention in grammar class. The dispute between Rogers Communications of Toronto, Canada’s largest cable television provider, and a telephone company in Atlantic Canada, Bell Aliant, is over the phone company’s attempt to cancel a contract governing Rogers’ use of telephone poles. But the argument turns on a single comma in the 14-page contract. The answer is worth 1 million Canadian dollars ($888,000).

One of the first things we discuss is Common Law of Contract is the idea of oral contracts. As Prof. Lundmark's handout (see handout 1) notes, the "ready provability of oral contracts" distinguishes common law from civil law. But how far does this leniency toward oral contracts go? Good question and one that reared its ugly head in a story that has become legendary on the Internet. The story involves Internet dating, the age-old question of whether the dinner bill should be split on the first date, and the remedy for failed expectations when the date goes bad. Remedy? A post at quizlaw.com explains how one rejected and dejected dater tried to use contract law to reclaim the money he spent on a first date. It's a funny (pathetic?) story that's worth a quick look.
Posted by Matt at 07:38

Over at the Legal Writing Prof Blog, they have posted some great links to online resources for students who are looking for help with English grammar. My personal favorite, and one I use for class, is a website run by Purdue University called OWL. If you have any question about grammar, I strongly suggest taking a look at one of these sites.
Posted by Matt at 09:08

The target audience for this blog is the students in the University of Muenster's Foreign Law Program (Fachspezifische Fremdsprachenausbildung), however anyone with an interest in the Common Law legal system should find something of interest here. It seems like practically everyday I come across some news item, blog post, law review article, etc. that relates to one of the common law subjects being taught in the Foreign Law Program. Thus, the purpose of this blog is provide a space to post links to and brief commentary on these items of interest, with the hope that students may find at least some of the items useful in their quest to understand this legal system that is indeed foreign to them. Finally, I hope students and others interested in the topics posted here will feel free to leave comments, ask questions and raise issues in the space provided on this blog. Enjoy.
Posted by Matt at 20:24