As students who have heard my lecture on the Common Law Court System might recall, American courts at both the state and federal level are courts of general jurisdiction. Put another way, they hear all kinds of cases and there is not, at least at the highest levels, a division between civil and criminal cases. But students will also remember that I use Texas as an example of the exception to this rule, Texas having a Supreme Court that is the highest court for civil cases and a Criminal Court of Appeals, which sits as the highest court for criminal cases. I ran across an interesting article about the Texas system recently that not only includes a short explanation of how this system developed, but also reports that some in Texas are considering doing away with this unique, by American standards, division of labor. It's worth a read if you are interested in the American court system and some of its idiosyncrasies.
Posted by MBL at 18:15

Students who have been following the school shooting story out of Connecticut and its political aftermath might be interested in a recent story published by the National Law Journal. The question about what kind of gun control legislation is possible in America is a legal as well as a political question. In 2008 the U.S. Supreme Court, in a landmark decision, ruled that gun ownership was an individual right. How far this right can be limited remains a matter of debate, both politically and legally, as the Law Journal points out.
Posted by MBL at 18:05

Thomson, Reuters has a nice article explaining why outspoken Justices of the Supreme Court should not have to recuse themselves simply because they have already taken a public stance on an upcoming case. More importantly, the article gives good examples of when it is appropriate for Justices to remove themselves from a case. For that reason alone, it is well worth a quick read.
Posted by MBL at 11:01

The Politics of Appointing Judges

The New York Times reminds us yesterday that the process for appointing federal judges in the United States has become extremely political in the past few decades, culminating with a current vacancy rate of 9% of all federal judgeships. The editorial is a good review of how federal judges are selected and what role the filibuster now plays in the U.S. Senate to stop a President from filling judicial vacancies.
Posted by MBL at 10:55

Too Hard to Change?

Is the American Constitution too hard to amend? Here is one person, among many, who thinks so. For what it's worth, I think the answer is: it depends on who is trying to changing it and for what purpose.
Posted by MBL at 21:26

When must a judge or justice remove himself or herself from a case because of a conflict of interest? The question is rarely easy to answer as what amounts to a conflict of interest can be disputed. Recently, Supreme Court Justice Stephen Breyer recused himself from two upcoming cases concerning environmental regulations. Justice normally do not say why they are recusing themselves, but some speculate that Justice Breyer is taking a pass because his brother was on the appeals court panel that ruled on these two cases in the lower court. Reuters has an article detailing Breyer's recusal, including this interesting tidbit:

During each Supreme Court term, there typically are a handful of cases in which justices recuse themselves. Members of the court make those decisions based on a federal statute, court rules and personal judgment.


In its "Statement of Recusal Policy," the court spells out situations where a justice must bow out. These include cases in which a relative of a justice has appeared as a lawyer or a justice has a financial interest in the outcome. At the same time, the guidelines caution that members of the court should not go beyond the required recusals. 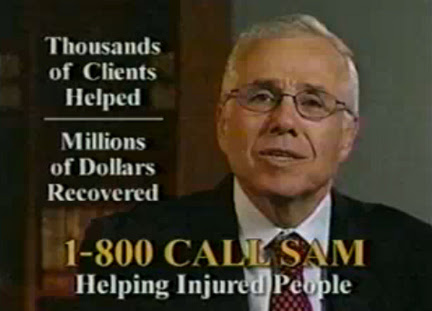 Wie finden Sie Ihren Rechts­anwalt? asks Stiftung Warentest in a recent online survey. Good question, and my hunch is Germans go about this task in a different manner than Americans, at least outside of the business context. One main reason for my suspicion is the fact that in the United States lawyers can advertise for their services. I grew up watching Sam Bernstein commercials on television, where he implored viewers to call him if they had been injured: 1-800-Call-Sam was the number (see above picture)! Such commercials surely have an impact on how people find a lawyer. Whether this is a good thing or not is an entirely different question.
Posted by MBL at 07:52