Is the United States a direct democracy? Surely not, at least at the federal level. The President is not elected by "the people" but by an Electoral College. There is no ability for citizen referendum or other direct citizen input at the federal level. And judges are appointed by politicians for life. These are just a few features of the federal government that make it anything but a version of direct democracy. But many states, especially California, do have governments that make them look closer to a direct democracy. In California, citizens can amend their constitution by referendum. Their judges can be voted out of office at the end of their term by the people, and politicians (including judges) can be removed in the middle of their term by recall.

Let's recap. The legislature banned gay marriage. The Court said the ban violated the Constitution. The people then amended the Constitution, overruling the Court. Now the Court is going to rule whether the people's action violates the Constitution. And if they do rule that way, the people are threatening to remove the judges. Simple. Which begs the question. Is democracy, as it is practiced in California, a good idea?
Posted by Matt at 10:28

Courts in the United States are often criticized by some when they cite to foreign sources in their decisions. Supreme Court Justice Antonin Scalia is probably at the forefront of this anti-foreign law crusade, and he usually has much to say on the topic when given the opportunity. At a recent event in Houston, Scalia fretted that the U.S. Supreme Court will use foreign law in its decisions at an ever increasing pace. But is it such a bad thing to look at how courts in other jurisdictions deal with issues that are universal? Is this anti-foreign law crusade simply futile? Micheal Dorf at Findlaw has more.
Posted by Matt at 10:18

Is Clinton Barred by the Constitution?

There is an interesting question floating around the blogesphere about whether Hillary Clinton is barred by the Constitution from accepting the Secretary of State nomination (a nomination which technically has yet to be made official). You see, Article I of the Constitution basically prohibits sitting members of Congress from taking new jobs in the government if the salary for that job has increased during the current term of the member of Congress. The Secretary of State's salary has indeed increased during Hillary Clinton's current term as U.S. Senator. But this is probably just an academic question. As bloggers over at the Ecomonist point out, it seems unlikely that Republican Senators, after years of watching the Bush Administration play fast and loose with constitutional rights, will hold up Hillary's nomination because of such an obscure part of the Constitution.
Posted by Matt at 08:00

I have written in the past about the landmark decision of Loving v. Virginia in which the U.S. Supreme Court stuck down laws banning whites and blacks from marrying. I have also written about how the courts are becoming involved in the issue of gay marriage. But I have yet to suggest that these two cases raise the same issue, although I believe they may. Anna Quindlen of Newsweek has a nice short piece in this week's issue explaining how these cases are basically the same. Surprisingly, the question of whether this is a civil rights issue on par with issues raised by racial discrimination is somewhat controversial. And ironically polls show that a vast majority of African-Americans oppose gay marriage. So give this question some thought. Are laws prohibiting gay marriage the same as those which prohibited people of different races from marrying?
Posted by Matt at 09:24 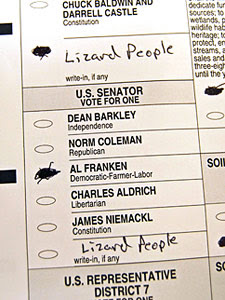 Students who have been paying attention to the aftermath of the recent election in the United States probably know that some races for the U.S. Senate and House of Representatives are still not decided. The Senate race in Minnesota is particularly interesting, as both candidates are challenging the validity of ballots cast by voters. How can this be, you might ask. Well, the Minnesota Public Radio website (this link will take you the pictures) has pictures of some of the ballots that are being challenged. It is fascinating. I encourage you to take a look.
Posted by Matt at 10:16

What happens if the Democrat-controlled Congress wishes to order President Bush, once he becomes former-President Bush, to appear before a Congressional committee to answer for some of the things he did while President? It is clear that the idea of separation of powers in the Constitution precludes Congress from ordering a sitting President to appear. But a former President? The New York Times addressed this question a few days ago, and dragged out this quote from former President Harry Truman:

Could it be that even former Presidents can exercise Executive Power? I see Truman's point, but could this apply equally to all of Bush's advisers? I have no doubt Bush would make this argument considering how expansively he has interpreted Executive Privilege.
Posted by Matt at 20:00

3. Speaker of the House

6. Secretary of the Treasury

Of course, constitutional scholars believe this federal law is unconstitutional because the Constitution only talks about the Vice-President and then an officer (many believe this means member of the Cabinet) with regards to succession.
Posted by Matt at 19:42

After a long break, postings to this blog are now resuming. And I'll start with a question raised by students in my "Debating Controversial Landmark Court Decisions" class. This question actually should be of interest to students in all my classes, be it English or law. The question: are television cameras allowed to film oral arguments in front of the U.S. Supreme Court? The answer: No. I actually wrote about this topic about a year ago, but a case is currently before the Court that has made me want to revisit this issue.

The case, Federal Communications Commission v. Fox Television Stations, concerns fines given out by the FCC to the Fox television network. The fines were were for "indecent" language on live television (here is one example from the Golden Globe Awards; at around 5:35 of the clip you can hear U2's Bono utter the "offensive" word).

In the lower courts, lawyers arguing in defense of Fox used the offending words as part of their arguments. One commentator described the arguments as being littered with the talk of seventh grade boys in a locker room. So as time drew near for oral arguments in front of the U.S. Supreme Court, commentators began to wonder whether Fox's attorney would dare to utter these words in front of the nine justices of the Supreme Court. So if televisions are not allowed in the courtroom, then what's the big deal?

Well, a few years ago the Court started allowing audio recordings of oral arguments to be released on the same day of the arguments. But in anticipation of this argument, Chief Justice Roberts has said the audio from this particular argument will not be available until the end of the term. This rather silly attempt to protect the public from naughty words was for naught. The lawyer for Fox decided against filling the hallowed chamber of the Court with F-words and S-words, so the audio of the arguments is "clean." Heaven forbid a few colorful terms be heard over the public airwaves or via mp3 download from the Court.
Posted by Matt at 15:36