Supreme Court declines to hear 'So help me God' lawsuit 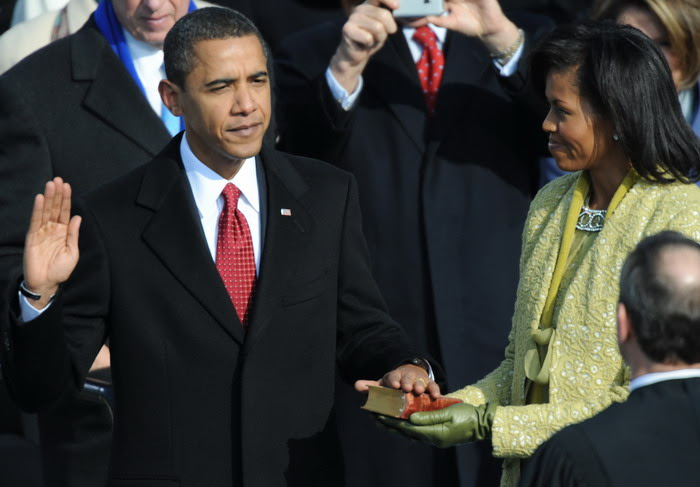 The Establishment Clause of the U.S. Constitution, or least the way the Court has struggled with it, is not an easy concept for students to grasp. What makes it most confusing is that America is perceived as an über-religious country, and then students read about the wall of separation and are left totally confused. I assume most religious conservatives in America share their plight.

But if there really is this wall separating church and state in America, why are references to God seemingly everywhere: on money, in the national motto, in the pledge of allegiance, said by the President after almost every televised speech, as so on. Recently the U.S. Supreme Court was asked to consider the same question in the context of an Establishment Clause challenge to the taking of the Presidential oath whereby the Chief Justice finishes the oath by asking the soon-to-be President to repeat "so help me God."
Posted by MBL at 22:02 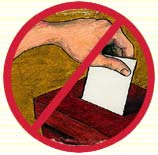 Judicial elections in the State of Michigan have become some of the most expensive and downright nasty in the country. In a recent guest commentary published in the Detroit Free Press, several judges suggest it is time to fix a system where:

Among the ideas suggested: scrap elections of judges!
Posted by MBL at 17:52

Do Away With Life Tenure? 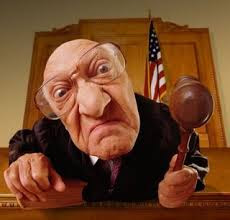 The United States Constitution provides that judges "shall hold their Offices during good Behavior," which put another way means they are appointed for life. Is that a good idea? Not really claims one law professor.
Posted by MBL at 21:50

Just in case my explanation of the way Americans choose their President was not clear, the Economist magazine has a very clear and concise one. The wonderful British accent of the narrator perhaps makes this explanation much more enjoyable to listen to than the one I provided in class.
Posted by MBL at 08:22

One concept that seems to boggle the minds of students learning about the common law jury system is jury nullification. As students have learned, generally this is the principle whereby jurors may ignore the law when reaching their verdict if they believe in good conscience that applying the law strictly in a case would be unjust. As I repeatedly tell students, most jurors have no idea that they have such power, and no judge in his or her right mind would instruct the jury about this right.

But would happen if a private citizen tried to inform potential jurors of this right on their way into the courthouse? Could that be considered tampering with the judicial system? Illegal? It should be, argued New York prosecutors in a case they brought against an 80 year old retired professor who stood outside courthouses and distributed information to people about jury nullification. See here for the result.
Posted by MBL at 21:43

Yes, even the selection process for choosing a potential Vice-President of the United States has been boiled down to some catchy, made for TV tagline. Today we refer to the selection of a running mate for a presidential election as the "Veepstakes." Probably not what the founders had in mind when they created the position in Article II of the U.S. Constitution. Of course, as students in my American Constitutional Law course should already know, the founders set forth a different means for choosing a Vice-President than the one we have today. It was changed by the 12th Amendment.

But my real point here is not rehash what we learned in class, but to direct you to an in-depth article in Die Zeit about the current speculation as to who GOP presidential nominee Mitt Romney will select as his running mate. The article goes into why this choice may be important, and gives examples of how a bad choice can hurt the presidential candidate. A good, albeit long, read. At least its in German.
Posted by MBL at 21:30

Well actually "Kiffen gegen Schmerzen" is the name of a very informative Die Zeit article on California's medical marijuana law, although the article also notes that "Kiffen gegen die Staatskrise" may be equally applicable as the State of California receives over $1 billion dollars annually in tax revenue from the sale of medical pot. But I digress.

Students in any of my courses where we have discussed the American version of federalism should immediately know why this law is of interest to us. Students currently in my American Constitutional Law course will learn why next week. Either way, anyone interested in learning more about California's somewhat controversial law should take a look at the article in Die Zeit.
Posted by MBL at 21:18