As is usually the case in late November, the press (even the German press) was filled with stories about the President exercising his pardon power. Of course, the pardon in this case was for a turkey, something that over the past several decades has become a tradition in the United States marking the beginning of the Thanksgiving holiday weekend. However, students in my constitutional law course know (or at least they should) that the president's power to pardon individuals is real and important. The Economist has a nice, short "explainer" regarding how this power works. Well worth the read.
Posted by MBL at 11:57

At some point or another most of my students have heard me say that the constitution we study today in American Constitutional Law is actually America's second constitution. The first one, the Article of Confederation, were an abysmal failure, leading to its total repeal and replacement with what we now call the Constitution of the United States of America. So why did this first one fail? As usual, the National Constitutional Center has this question well covered with a post entitled "10 reasons why America's first constitution failed." A nice a short read that is worth your time. Check it out!
Posted by MBL at 08:23

The Importance of Dissenting Opinions

Students in all of my courses are at one point or another confronted with dissenting opinions found in appellate court cases. While the dissenting opinion is a somewhat new feature of German constitutional jurisprudence, it has a long and storied history in American constitutional law. A recent short article in the magazine Reason underscores the importance of dissents.
Posted by MBL at 11:38 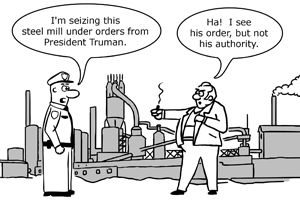 Last night in my Constitutional Law course we discussed the landmark Youngstown Sheet & Tube case. The National Constitution Center has a wonderful summary of the case and the various opinions filed in it. Students wishing to obtain a better understanding of the case should take a look at the post. There is also a link to a video shown on C-SPAN about the case.
Posted by MBL at 08:00

The Origins of Judicial Review in the United States

Students of my American Constitutional law course, and to a lesser extent all my other courses, are aware that the U.S. Supreme Court is basically a constitutional court. However, a careful reading of Article Three of the U.S. Constitution shows that in fact the Supreme Court was not expressly given the power to review whether actions taken by the other two branches of government violate the constitution. As it turns out, the Court gave itself this power in perhaps the most important decision ever issued by the Court: Marbury v. Madison. C-Span has a video of a discussion concerning the history of this case and its impact. For all you American constitutional history junkies out there, this video is worth checking out.
Posted by MBL at 12:24

The Role of Judge and Jury

Other than the use of case law, there is perhaps nothing that distinguishes the common law system from the civil law system more than the roles played by judge and jury in a trial. This is particularly so when it comes sentencing (criminal cases) and remedies (civil cases). The jury, as we learn in class, has the role of "finding the facts." In other words, they hear the stories told by the parties and then try to determine what "really" happened. In civil cases it is also up to the jury to determine the appropriate remedy upon a finding that the defendant was liable. In criminal cases, on the other hand, once the jury has found a defendant guilty, their job is done. The sentencing of the convicted rests solely with the judge. With one minor exception in the United States: Capital Punishment. In class, I tend to over generalize this a bit in order to keep it simple. In reality, the Supreme Court's decision in Ring v. Arizona does not explicitly place the decision to execute the convicted solely in the hands of the jury. However, a case being heard by the Court this session might change that.
Posted by MBL at 12:12

A recent Miami Herald article about a movement to amend the Florida Constitution to allow for judicial term limits serves as a good reminder that each state controls the manner in which their state court judges are selected and how long each may serve. The article explains that:


In Florida, justices and appeals court judges serve six-year terms. They aren’t reelected as trial court judges are; rather, they go before voters in an up-or-down vote as to whether they should stay in office.

The merit retention system was added to Florida’s Constitution by voters in the 1970s, but no justice has been removed from office because of it. From 1980 to 2014, 42 Supreme Court justices have faced a merit retention vote. All received a majority, allowing them to stay in office.

This illustrates how some states have a mixture of the selection processes we discussed in class. Here we see a system that has competitive elections for its lower court judges while uses the retention system for its higher court judges. Those wondering why some would want to limit the term of higher court judges need look no further than this quote from the article:


Rep. John Wood, R-Winter Haven, said term limits for the state’s seven justices and 64 appellate judges would ensure “diversity of legal philosophy,” “enhance the proper role of the judiciary,” and “create a true balance of power” with the Legislature and the governor, both already subject to term limits.

It seems relatively clear that advocates of this changes believe that judges in Florida have become too entrenched and too powerful.
Posted by MBL at 12:00

Yesterday I wrote about whether the death penalty is heading for extinction in the United States. Today I'd like to draw your attention to a podcast found on the National Constitution Center's website featuring answers to questions like:


Does the Cruel and Unusual Punishment Clause prohibit the death penalty? If not, are some modern methods of execution “barbaric” enough to violate the Clause? What standard should courts use to determine if a punishment is “cruel and unusual”?

Check it out and see if you can follow along with the discussion!
Posted by MBL at 13:47

The End of the Death Penalty in America?

Recent statements by Justice Antonin Scalia have created somewhat of a firestorm among members of the legal media. In a recent speech at the University of Minnesota the Supreme Court Justice remarked that he would not be surprised if a majority of the Court concluded that the death penalty violated the U.S. Constitution. Students interested in this issue should take a quick look at (as well as listen to) a story on the Minnesota Public Radio website.

Both the Washington Post and New York Times recently ran articles about how Chief Justice Roberts distributes opinion drafting assignments among the nine Justices of the United States Supreme Court. Both articles are worth reading for anyone interested in the inner workings of the Court.
Posted by MBL at 13:43 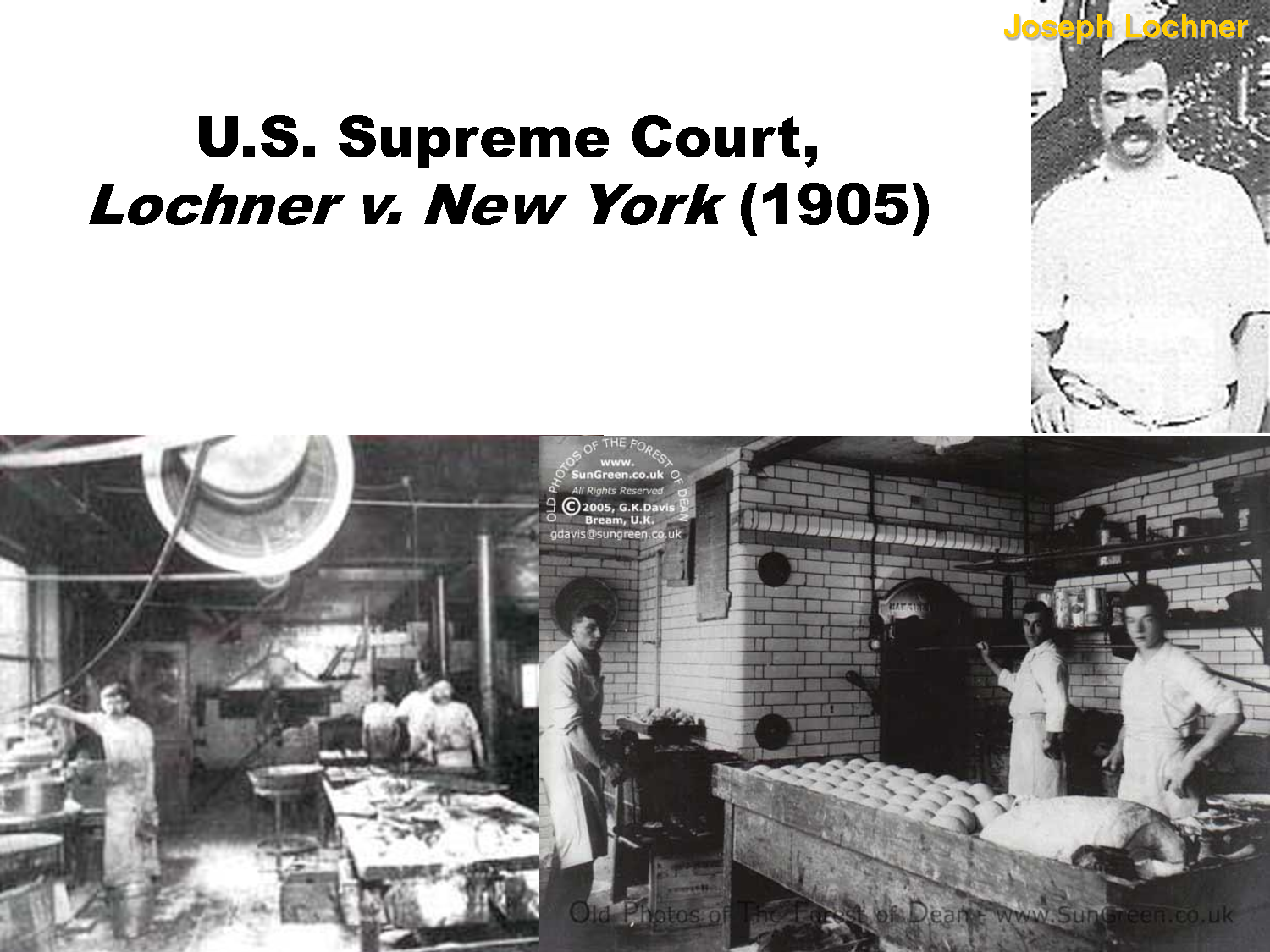 Students attending my American Constitutional Law class are now somewhat familiar with the debate that has raged for well over a century concerning the meaning of the Commerce Clause, found in Article One, Section Eight of the U.S. Constitution. As students now know, a central aspect of this debate involves how one views the role government should play in regulating business. In addition to reading the Commerce Clause narrowly, advocates of a more laissez faire approach also believe that the concept of "liberty" found in the Constitution includes the right to contract. Under this right, the government may not interfere with a contract between employer and employee. During the so-called Lochner Era, the Court used this reasoning to strike down several federal and state laws that sought to regulate the employer/employee relationship. While Lochner was eventually overturned by the Court, its legacy lives on. Students interested in understanding the role Lochner plays in modern American constitutional jurisprudence might want to check this discussion on C-Span. The Constitutional Center also has a nice summary of the case.
Posted by MBL at 11:13

How on earth could I resist posting a link to an article that mentions Donald Trump and the UK Supreme Court in the same sentence? For students in my JTMCL and Common Law Legal Systems courses (Münster), this article also reinforces the idea that the UK Supreme Court is the court of last resort (with some minor exceptions) for court systems found in England/Wales, Northern Ireland and in this case Scotland.
Posted by MBL at 12:18

Today is election day in the United States, and while there are no federal elections taking place, several states have candidates as well as issues on their ballots. As students in most of my courses become aware, many states in the United States select their judges via an open, competitive elections. The wisdom of such elections is always a matter of debate, and the recent campaign for the Pennsylvania Supreme Court has shined the light once again on some of the more troubling aspects of judicial elections: the influence of campaign contributions and outside spending by issue advocacy groups. In a piece entitled "Mystery donor group fuels attack ads in PA Supreme Court race" Eric Holmberg reports on how these advocacy groups are attempting to influence voters while at the same time hiding their identity. Reports like these have led some to question whether it is time to do away with judicial elections in the Keystone State.
Posted by MBL at 09:58

Jury Selection and Race in the United States

At some point students in most of my courses are introduced to the method used in the United States to select juries, a method that basically gives advocates a limited number of "objections" to potential jurors. These objections take the form of peremptory challenges and can be used by advocates to remove potential jurors from the jury pool for any reason . . . except for the wrong reason. In the Batson case the U.S. Supreme Court ruled that a "wrong reason" included removing a potential juror because of race. As Garrett Epps of the Atlantic writes, proving that race is a factor in the removal of a potential juror has been difficult and now is the focus of case being heard today by the Court:

Students are strongly encouraged to read Epp's wonderful summary of the case that also includes a little of the history concerning the use of peremptory challenges by common law courts. Along these same lines a piece in Slate by Mark Stern and an opinion piece in the New York Times by former United States Deputy Attorney General for the Bush Administration Larry Thompson are also worth reading.
Posted by MBL at 09:39